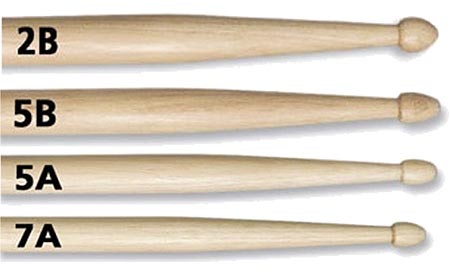 Choosing Drumsticks:  What Do The Numbers And Letters Mean?

I was surprisingly gifted a Drum Kit for my 10th birthday.  Sure nobody had heard of the brand of the drums or cymbals but I was nevertheless over the moon with a full sized drum kit at my disposal.  I remember sitting down and hitting it for the first time as if my parents were expecting me to somehow play the rolling tom-tom section from Phil Collins’ In The Air Tonight.  I tentatively hit the drums with my sticks and began to experiment.  I remember my mother saying that the sticks were ‘special ones the man from the shop recommended.’  These were my first pair of Vic Firth 5A’s.  At the time they were just two pieces of wood, my 10 year old self not caring or even knowing that another stick type existed.  I just wanted to hit the drums and make (what I thought) was a cool sound.

Most drummers start out just like myself, using whatever sticks their Teacher, Music Shop and friends recommend, or what is included in a general snare drum or practice pad pack.  There are a plethora of different stick types available nowadays, leaving new and even seasoned drummers confused.  And if the hundreds of different types weren’t enough, they all come in many varying brands.  Despite an over-saturated market and a massive range, it is easier to find the right stick for you then it may seem.  But first, you need to understand what the differences are between sticks and what all the numbers and letters mean!

The length of a drumstick generally runs from 15 to 17.5 inches.  Some drummers prefer smaller sticks and others use larger ones.  Again this all depends on the size of your hands and simply what feels right for you.  A common misconception in drumming circles is that if you have a longer stick you will have a better fulcrum to work with.  This is simply not true as everyone’s fulcrum is different on every stick due to everyone having different physical features.

The weight and diameter of a stick is usually indicated by number and letter respectively, eg. 7A, 2B, 5A.  The higher the number, the lighter the stick.  Diameter wise, a 5B stick is thicker (larger in diameter) than a 5A stick.

The three main stick weight categories are 7, 5 and 2 although drumsticks conventionally scale from 1 up to 9.

Generally used for jazz, marching bands or any lighter musical setting.  A 7A stick for example is thinner than a 7B and a 7AN or 7BN is essentially a 7A and 7B stick with a nylon tip instead of a wood tip.

5 Series sticks are slightly thicker and heavier than the 7 series and are the most commonly used drumstick used worldwide.  They are versatile enough to be effective in most styles and genres.

2 Series sticks are considerably heavier than 5 and 7 series and are usually used by hard hitting drummers in rock and metal contexts.

The majority of drumstick companies adhere to the general and most popular styles, (2,5 and 7) however many companies nowadays create custom sticks to suit their customer’s needs. Most reputable drummers have a signature stick they have tailored to suit their own style and physical features.

It is important to keep in mind that everyone’s stick choice is personal.  Firstly, one should consider what music they will be predominantly playing as this is the easiest way to narrow down what stick is for you.  There are many physical factors which can contribute to what stick is right for you such as hand length, arm length, wrist strength and so on but the best way to find the right stick for you is to simply try them out.  Most music shops will have a practice pad set up near where they sell their sticks for customers to use.  Don’t be afraid to test out whatever sticks you may need to and make sure you experiment with plenty of different sticks within the different styles that you play before you make your decision.