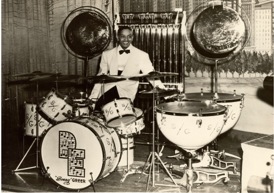 Making The Right Sounds : How The Drum Kit ‘Ensnared’ Jazz

An informed dissertation detailing how the progression of the Drum Kit tied in with Jazz’s development during the early to mid 20th Century.

Early 20th Century gave birth to two significant musical concepts: The Drum Kit and Jazz. The history behind the two is as distorted and unclear as some sounds that have resultantly been created and little information is available surrounding the evolution of The Drum Kit. What is known however is that it developed around the time period Jazz did, in the early to mid 20th Century.  In this dissertation key musicians and historical events will be examined to draw likely links between the two concepts. The who, what, when and where’s behind Jazz will be examined in conjunction with the birth and progression of The Drum Kit to come to a clear and concise verdict on not only how the sounds were created. but more importantly, ‘ How The Drum Kit ‘Ensnared’ Jazz, ‘ and has gone on to become a staple instrument in contemporary music up until this very day.

‘Jazz,’ as the musical movement was known and distinguished by characteristics such as improvisation, syncopation and swung notes. (National Jazz Workshop) The early history of jazz is a complex, but well documented set of historical events that many have tried to understand. It is commonly understood by many that Jazz eventually digressed  to some of the most prominent movements in popular music. (Funk, Fusion, Country, Pop, Rap, Soul and Metal) (Fidyk, 2009, paragraph 6) One instrument that is universally used in all the aforementioned genres is the drum kit. It wasn’t invented specifically for jazz, but the emphasis in which jazz focused on rhythm spearheaded its progression and development. (Fidyk, 2009, paragraph 8)

Relatively unfamiliar until the earliest part of the 20th century, the concept of the drum kit has progressed considerably from its primitive origins tracing back 30,000 years ago to what is available today. Changes were extensive and have been catalysed significantly from the turn of the 20th century due to social, economic and psychological ideologies that took place. These changes were seen prominently in the southern states of America and affected many oppressed African Americans. (Love, (2011, pg. 43)

At the beginning of the 20th Century drums and cymbals were available however, they were played individually, generally while standing. William F. Ludwig, a young entrepreneur and percussionist from Chicago, was frustrated with the fact that he couldn’t play ragtime beats proficiently due to the nature and positioning of drums and cymbals. As a result Ludwig created a foot pedal that allowed him to eliminate what was timely known as double drumming. (Nicholls, 2008, pg. 13)  The invention of the bass drum pedal paved the way for the impending development of the drum kit. This small technological improvement now allows a seated drummer to play the bass, snare and many other drums and cymbals simultaneously.

Drummers soon began to add other drums, cymbals, and other percussion related paraphernalia such as woodblocks, chimes, cowbells and tambourines.  (Nicholls, 2008, pg. 14) These set ups were known as trap sets, taken from the word ‘contraption,’ as some of them were literally quite astonishing and left many wondering what exactly the ‘contraption’ was. The following picture displays renowned Jazz Drummer Sonny Greer playing on an early 30’s Drum Kit that featured an assortment of drums, cymbals and timpanis appearing to be some sort of ‘contraption.’

With the 1920’s came the invention of the Low Boy. Approximately 12’’ high the Low Boy was a foot controlled cymbal stand that allowed the player, via a clutch mechanism, to bring two cymbals together to create a ‘chick’ sound. (Fidyk, 2009, paragraph 4) Before the Low Boy was introduced, early players would accent beats two and four by choking a suspended cymbal with their hand. The Low Boy allowed drummers to play syncopated rhythms around the kit or on cymbals as the left foot would be accented on beats two and four.

By the end of the 1920’s, the Low Boy had become known as the Hi-Hat. Throughout the decade the Low Boy was elevated to approximately 20” tall. Drummers now had the ability to play cymbals on the stand with their hands rather than just their feet. Swing Drummers of the day such as Gene Krupa and Philly Joe Jones wanted the option of playing time on their hands, therefore the stand was raised and thus the Hi-Hat was born. (Fidyk, 2009, paragraph 6)

The ever changing sound of the drum kit can be largely accredited to the technological advancements that have taken place. Rhythmic ostinatos were played on the snare and bass drum separately while other percussion instruments were seen played by another or other drummers  on wood blocks, temple blocks and cow bells. Among other changes, the popular music of the 20’s was refreshed by the innovative refinements of the Drum Kit. Subsequently, as it developed, so did the music that was being played. By the end of the 20’s drummers were normally seen using their right hand to play swing patterns on the Hi-Hat while the left hand was left free to articulate melodies or space in support of a particular arrangement or solo part on the snare drum.

The feet were now commonly used to keep time as the hands could now efficiently be used (efficiency was improved/economy of motion was improved) due to the right foot playing bass drum and the left playing hi hat. By the start of the 1930’s many drummers began to fully grasp the multi limbed orchestrations that were possible in the drum kit, courtesy of the technological developments that happened a decade earlier. One such drummer that was able to proficiently demonstrate this was Gene Krupa.

Krupa joined the Benny Goodman Orchestra in 1934 and revolutionised the way drummers were viewed in a band. His impressive and ground-breaking tom playing in particular can be heard on the 1937 hit Sing, Sing, Sing. (Johnson, 1999, pg. 35) Not only did he help pioneer drum kit played, Krupa paved the way for further advancements of the Drum Kit both aesthetically and functionally.  He standardized the Drum Kit set up that many Jazz Drummers use today. It features the following drums and size configurations:

Many Big Band drummers today still use a similar set up with slight variations in certain drums and cymbals to cater for logistics or appropriate sound tastes. This configuration is quite efficient to set up and pack down hence why it was and still is extremely popular to the present day. Krupa also went on to front the idea tuning both drum skins as opposed to just the top skin. He also made aesthetic contributions as he readily used different drum shell finishes and inspired many drummers after him to do the same. All Drum Kits were initially covered in either white or black and by the 1940’s many different colours were appearing, debatably because of Krupa’s initially dabbling with them during his stints with the Benny Goodman Orchestra.

Krupa’s groundbreaking playing on Sing, Sing, Sing is frequently regarded as the most famous tune to come out of the Swing Era. Initially intended ironically as a vocal feature, it was soon shifted to the Drum Kit after Krupa’s impressive playing in an initial jam session with the band. Benny Goodman Vocalist Helen Ward recalls his virtuosic playing on the track:

“One night Krupa refused to stop drumming when he got to the end of the third chorus and Goodman picked up his Clarinet and soloed right along with him.” (http://www.allaboutjazz.com/php/article.php?id=16281#.UGBPxI0gfi4)

The tune continued to sail along in this way until it reached a length of eight minutes – and filled both sides of a 78. The power of Krupa’s drumming managed to change a whole arrangement originally intended for vocals. Humourously it was said that Krupa was able to make the drums ‘sing,’ As the 1930’s came to a close a new musical movement was about to take place, that continued to alter the drums (and melodic instruments of course) stylistically. The movement was known as ‘be-bop’.

With the onset of the 1940’s, the swing era had well subsided and the be-bop bug was beginning to set in. Be-bop was a musical movement starkly contrasted to that of the Swing era. Commonly described as ‘listening music rather than dancing music’ (Fidyk, 2009, paragraph 10)   it featured complex and unpredictable melodies and harmonies and focused on virtuosic playing. Other elements included unconventional chromaticism, extremely fast tempos, discordant clashes and polyrhythmic phrasing. Swing drummers from the late 20’s and 30’s found that in bebop playing the rhythmic focus changed from the hi-hat and bass drum to the ride cymbal (Nicholls, 2008, pg. 123)

Up until the 40’s, drummers were viewed as the principle keepers of time and arguably the leaders of the rhythm section.  Be-Bop drummers changed the way jazz drumming was approached both technologically and physically. The players of the era used the Drum Set to add colours and textures by varying rhythmic ideas and playing fills. The overall time feel was generally a lot lighter and the drums were smaller. This created a lighter, ‘faster’ feel that aided in the overall sound within the band which largely accredited to the sound of Be-Bop. (Lemponen, S. 2001, pg. 14) A typical Be-Bop Drum Set consisted of:

The 1950’s were home to the birth of the synthetic drum head.  This was a very important innovation that changed the sound and feel of the snare drum. (Nicholls, 2008, pg. 45) Up until the late 50’s all drum recordings were done on a calf skin head which was prone to falling out of tune and breaking. The introduction of the plastic head changed the way drums were tuned, sounded and generally speaking prolonged the life of the skin. Calf heads had many downfalls that the plastic head remedied. If it was hot and humid the drum would be monitored and tuned frequently in order to keep a constant sound. If it was quite dry in winter and the calf head was played, the drummer would constantly have to lubricate the heads with water in order to capably play them. The rebound of the plastic skin greatly surpassed that of the calf head which subsequently led to a stylistic change in playing. Many Jazz drummers were now able to play snare drum patterns with more ease as the skin provided the player with far more response and a crisper, cleaner sound.  (Johnson, 1999, pg. 29)

Throughout the 1900’s right up untill 1950 many technological changes occurred within the Drum Kit. They notably helped to alter and shape the sound that is Jazz. From the innovation of the hi-hat stand to the changes in toms sizes, all these alterations undeniably helped shaped Jazz rhythmically and as a result melodically in a way no other instrument could have.

The 20th Century signified a period where the Drum Kit was born and developed timelessly. It was nourished by the musical developments of the time and together with the impending rise of Jazz become one of the most influential and commonly used instruments in the world. The history of the Drum Kit is an intriguing account that coincides appropriately with the birth of Jazz and the two marry together brilliantly. The two provide strong scaffolding for impending musical advancements that have taken place right up until this very day.