You Are Never Too Old To Learn Piano!

“Am I too old to learn piano?”  We have found this to be a common question among many adults wishing to take their first steps into the wonderfully rewarding world of music.  Age related concerns are shared by those in their early 20s through to those aged in their 50’s, 60’s, 70’s and older.  Why?  Because at some point in time, some totally ignorant music teacher somewhere in the world started pedalling the ridiculous notion that if you are going to learn an instrument you need to start young.  Now, after decades and decades of this misbelief being perpetuated in the wider community, the really unfortunate thing is that many people believe it.  These people have always wanted to learn the piano, but dismissed the possibility.  “You can’t teach an old dog new tricks” is a common saying that is simply not true!  People of any age are capable of learning the piano, all it takes is a good teacher, a little bit of practice, and a desire to learn and enjoy yourself.  So if you are reading this and you are one of these people, book a free lesson with us and we’ll prove you can do it!  You are NEVER TOO OLD to learn piano.

You might be put off and discouraged having seen a child playing the piano extremely well, but the simple truth is that everyone learns at their own pace, and starts in their own time.  Just because you see a young child blazing through Fur Elise, does not mean that you will not be able to achieve the same thing.
Many people believe that children learn faster than adults. This is a myth – it simply isn’t true. In fact, most often, adult beginners progress more quickly than children.  Adults are generally more intelligent and more disciplined and effective in their practice.  The only thing that holds back an adult from learning is negative thinking, whereas a child often doesn’t have any of these negative feelings and doubt in their own ability.

Simply set a goal you’d like to achieve, and work your way towards it.

Advantages of Learning Piano as an Adult 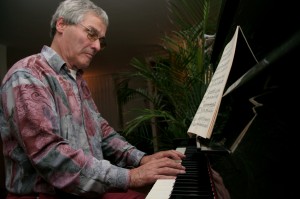 Lets take a quick look at some of the things that make learning much easier and more effective as an adult.
First and foremost, you’re doing it because you want to do it. Many younger children are persuaded to learn music by their parents, sometimes even when they have no interest in it themselves.  You have the advantage of being passionate about it.  You have an enthusiasm to learn and that alone is something that will take you further than anyone who is indifferent about it.  Also, as an adult you’ll have a better understanding of the strengths and limitations of your learning ability.  You’ll know how you learn best:  be it aural, visual, kinesthetic or anything else.  You’ll know how to achieve optimal improvement in your lessons and practice.  Your mind is more focused, analytical, and you are able to take logical steps to solve any problems you face with your playing.

Here’s a couple of things that could help you out as an adult beginner:

Just Go For It!

Ultimately, if it’s something you’ll be doing purely for enjoyment, there’s no reason not to do it!  I started playing tennis in my early teens, and initially I was discouraged by the number of younger kids that could play better than I could.  I thought to myself, what was the point when all these people have had such a head start on me?  That feeling was soon forgotten as I realised how much fun I was having, and in no time, with a little training and a good coach, I was able to hold my own against the others.  The same principle applies to the piano. Don’t worry about others being ahead of you, or having greater skill than you. Just go for it!

As I said earlier, “slow and steady wins the race.”  But if you don’t start the race, you’ll never finish it.  A final reminder: YOU ARE NEVER TOO OLD TO LEARN PIANO!