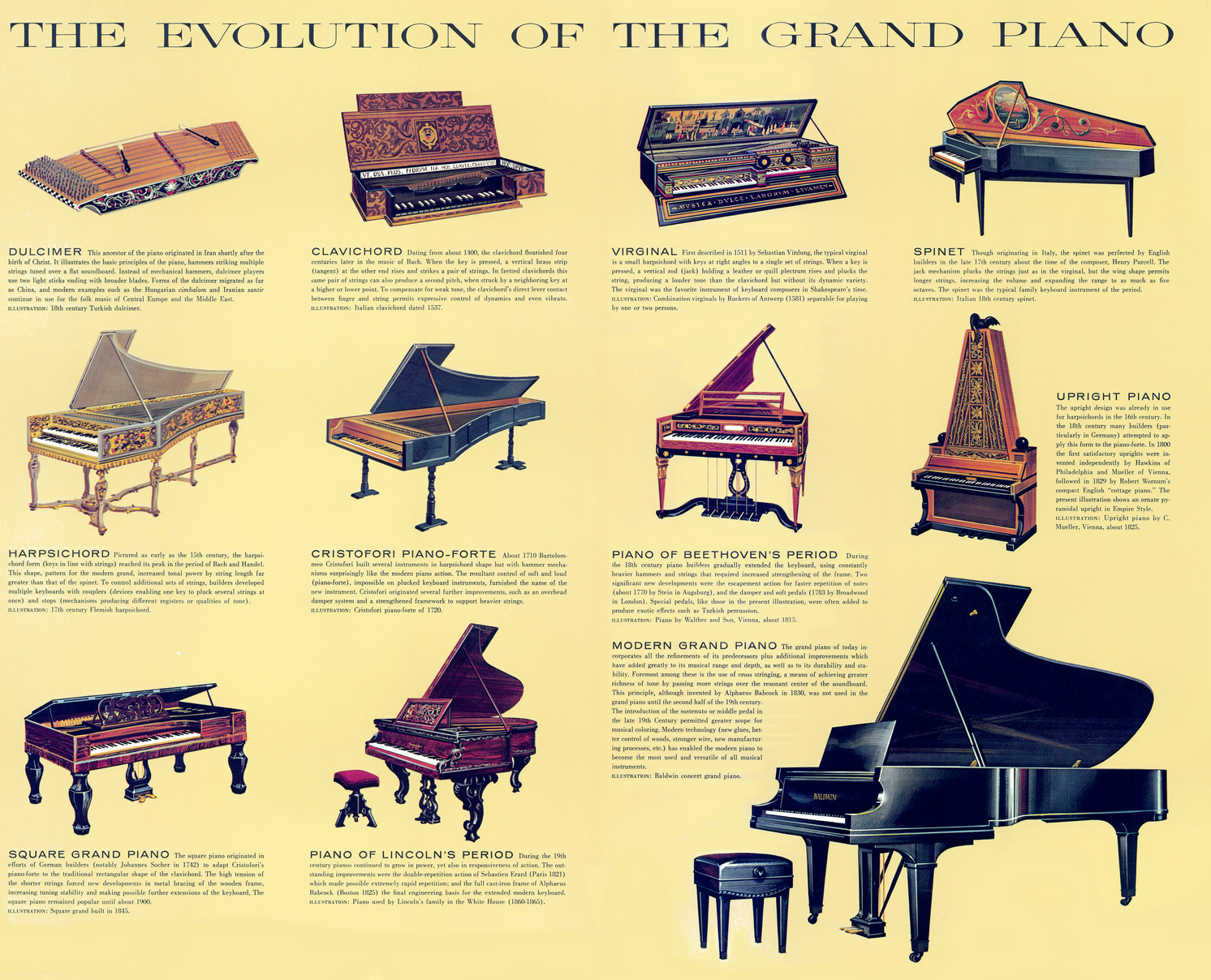 A Brief History of the Piano

by Kailan O’Dell, Piano Coach at Sono School Of Music

If you are like many piano players, you might not have given too much thought to the evolution of the piano itself.  The piano is a magical instrument, capable of beautiful colour and expression in a wide variety of styles. However, the piano wasn’t always this way. The instrument it is today is a culmination of a few precursor instruments and much trial and error.

Before we get onto how the piano was made, lets firstly talk briefly about how it works. A metal frame holds many strings in place in the body of the piano. When you press a key, a felt hammer is triggered, which strikes the strings and creates the sound. When you lift your finger off the key, a damper is laid back over the strings to cut off the sound.
The piano didn’t always work this way. In fact, one of the instruments that lead into the piano, the harpsichord, had a completely different method of creating sound. At a glance, the harpsichord looks quite similar to the piano. However, inside, they couldn’t be more different. While a piano creates a soft sound by striking the strings with a felt hammer, the harpsichord creates a much harsher sound by plucking the strings with a hard leather plectrum when the keys are played. This leads us to the primary innovation that the piano brings to the table over the harpsichord, the ability to alternate playing between loud and soft. A harpsichord plucks the string which produces a note of the same volume every time. Because of the piano’s unique hammer-action, the hammer can strike the string at a variety of different speeds, leading to louder or softer notes depending on how hard you hit the keys.

Why is it called a ‘Piano’?

If you’ve got some experience with music theory, then you’ll know that the term ‘piano’ means to play softly, and the term ‘forte’ means to play loudly. The piano actually gets its name from these terms. It used to be called the pianoforte, due to its ability to vary in dynamics from loud to soft, which was very innovative among other keyboard-style instruments of it’s day. Over time, it’s name was gradually simplified to the piano.

Since its creation in the early 18th century, the piano has gone through much evolution and improvement. Expert harpsichord maker, Bartolomeo Cristofori, created the first incarnation of the modern piano. The exact date of creation is unknown, however, some historical documents created by Cristofori’s employers indicate that it could have been created as early as 1698. From then, various people made subtle changes and improvements to the instrument. A man named Gottfried Silbermann developed the basis for the modern sustain pedal, a device to lift the damper off the strings so that the notes are sustained without having to hold the keys. Later in the 1700s, as a result of the industrial revolution, piano makers started using higher quality materials such as high-quality piano wire and iron frames. Later, the pianos range was expanded by about 30 keys, bring the range from what used to be roughly 5 octaves, up to around 7 and a half.

Today, the piano still continues to see improvement and re-imagining. Many electric pianos try to replicate the feel of a traditional piano by adding ‘fake’ hammer actions into the case of the instrument. With the introduction of much larger concert venues and the need for louder instruments, electric pianos are becoming quite popular as they can be plugged into speakers to generate a much louder sound than any acoustic instrument could produce. However, many purists still insist on playing acoustic pianos, and so high-quality microphones are inserted into the body of the piano, or placed around it to accurately capture the performance.

It’s hard to tell what is in store for the piano in the coming decades or centuries. However, it’s unrivalled tonal range, it’s fantastic utility for composition, and it’s sheer beautiful sound, ensure that it will be an instrument that will last throughout the ages.